Alliances will serve to strengthen the bonds of trust and loyalty between guilds. Be they firm friends or just on the cusp of a truce following a fierce rivalry, all guilds entering into an alliance can rest assured they will be in peace. 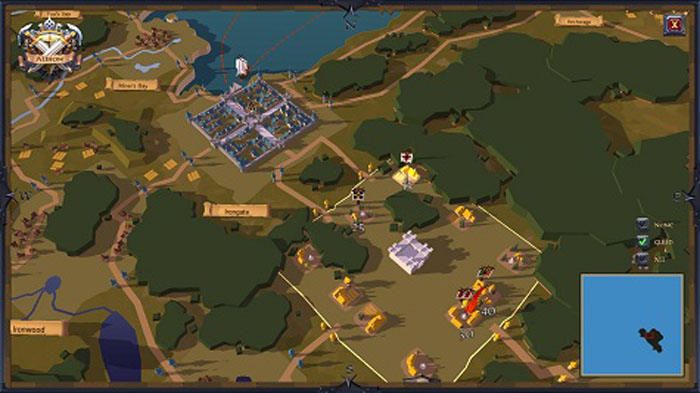 Alliances will be managed, by guild members who have the necessary rights, via a new tab under the Guild menu. Choosing to create an alliance will bring up a menu asking for the name of the alliance. Alliance founders can also choose a tag, which can be up to five letters, to set their members apart from the rest and reinforce the sense of unity across the alliance.

For each alliance, there will be an alliance founding fee. The founder chooses how to pay this fee, and then the alliance is official! Now the founder can begin inviting guilds to their alliance…

Inviting guilds to an alliance
Inviting a guild to an alliance works through Albion Online’s ingame messaging service. Alliance leaders (or other alliance members with sufficient rights) can send an alliance invitation to any guild simply by entering their name into the correct field, after which their guild leader, and his or her right hand, will receive the invitation in their guild inbox.

What does an alliance mean for me?
Members of allied guilds cannot attack each other, and all scheduled territory or player city battles will be cancelled as soon as the guilds enter the alliance. This means that an alliance can be used as a treaty or truce of sorts between two guilds on the verge of war.

Players in allied guilds will be immediately noticeable, with their nameplates and health bars coloured differently so that you can tell players apart within the alliance. This means you’ll know from afar who’s in your alliance but not in your guild.

Alliance members will get their own special alliance chat channel, so that they can chat amongst themselves if they want to get a message out to even the furthest reaches of the alliance’s empire.

We want guild alliances to pull guilds together and give a feeling of strength and unity, but we also want guilds to still keep their bonds special. Distinguishing alliance members from guild members allows this.

Alliances will be subject to an alliance tax – this is paid in a similar way to territory or player plot upkeep, and is taken from the guild leader’s guild account. The members of the alliance can agree amongst themselves how much of this tax is paid by each guild, so smaller guilds won’t have to generate as much money as larger guilds to remain in the alliance.

Alliances will be indicated in a player’s profile in-game, with the alliance tag also appearing before their guild name.

So there’s a short introduction to alliances! What do you think of our plans so far?